Huron Tractor is one of John Deere’s largest partners in Canada, with eleven locations servicing southern Ontarian's, but our story started with one man, over half a century ago.

Our approach to business has always put the customer first. We’re proud to serve a community of customers that spans agricultural operations, commercial enterprises and homeowners, with 11 store locations and one of the largest inventories of machines and parts in Canada. 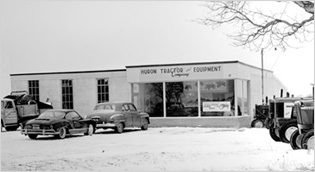 Why do business with Huron Tractor?